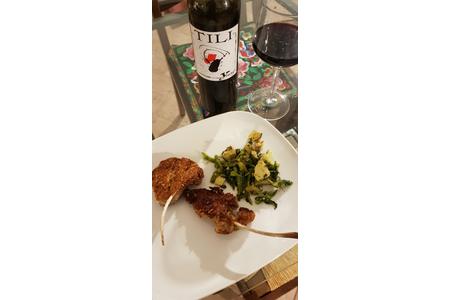 Italians are principled, at least in their opinions on food ? .

On the same cooking level is the recipe, I talk now about: deep fried lamb cutlets. The diet promoters would outcry,  fat cutlets with fat oil.  And even the crust is not for slimming. The cutlets are treated on both sides with  beaten eggs. Then they are covered with breadcrumbs. Some recipes even mix Parmigiano under the bread crumbs.  I think grated Nuts or Pistacchios is a better  idea, equally fat, but  not so heavy as cheese.

Then deep fry  them!  For deep frying I normally use the Wok that I  got in Wuhan.  But the cutlets are better fried in a pan. 1 cm of oil in the pan, and then fry them on  both sides, one after the other,

Diet supporter should go simply to hell. I prefer to eat not so often, but when, then wonderful food like deep fried lamb cutlets. The crispy outside opens to the melting fat and tender meats of the cutlets.

My side dish was a mixture of "Ciccoria"  and potatoes

I drank Tili Young and it fitted well. Tili Young is strong but a bit spicy and youthfull.  I would not have a too noble red with this dish.  I really can imagine a good structured white as the Nuricante. And obviously also my Martavello Swiss Knife would fit.