Sausages with bell pepper and chard 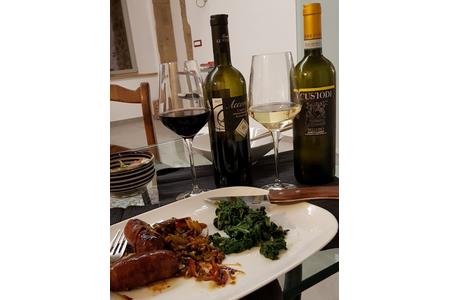 Sausages with bell pepper and chard

Pork sausages are the "national dish" in Umbria and there are mostly very salty. So one need to drink a lot of San Giovese with the meal :-) Or better, combine the sausages with a lot of good vegetables. I never use fat to fry sausages, they have enough of their own. I boil them initially in white wine, so they release their fat. This time I used an Orvieto Classico Vendemmia Tardiva (from Cardeto) and bingo! The sweatness of the wine and the spicyness of the sausages were a divine combination. I will bookmark the producer of these sausages too.  I got them from a  farm shop at the SS71. First sausages that survive my "too much salt" verdict.

The bell peppers had been prepared a day before, finely sliced and panfried in Olive Oil with garlic. For this dinner, I added them just at then of the sausage frying process, so they absorbed the wine/fat sauce of the sausage, very good!

The bieta (chard) I had gotten from the same farmer at the SS71, just cut.  I boiled it just 2  minutes in salted water. Then I had a good portion of it just luke warm with olive oil and a bit of  lemon, there are very few things better on earth, well there are... :-) This evening, "ripassata", this means the chard was slightly pan fried again with hot peppers, garlic and olive oil.

A dinner, asking for a good wine.

The drinking competition was between  the Accordo from Le velette and il Belloro from Custodi.   Both wines went well with the sausages. The white Belloro took advantage from being not very fruity, but more mineral, but anyway: the wine for Umbrian sausages is Umbrian Sangiovese. The Accordo beats the Orvieto Classico.  Different with the bell peppers. Here the white wine wins.
None of the two wines paired particularly well with the Chard, but the Custodi Orvieto did better. The Accordo got a strange after taste with the chard, maybe it is the mix of garlic and hot peppers.