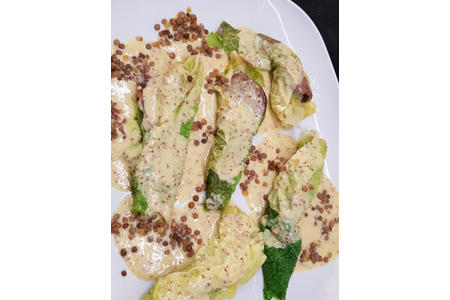 I like all kind of "interiors" "frattaglie as we say in  Italian.   Tongue is really more an "exterior" part of the animal, but it surely evokes as many "iihs" from food-ignorant people as any other interior  part.

When I have a tongue in front of me, a stupid joke, my father told me comes into my mind (my father is the source of nearly all my stupid jokes and citations)The joke:  a son is complaining with his mother about tongue for supper. To be funny he says, he does not eat what have been already in the mouth of other animals, he would prefer eggs (only who grow up in the countryside and was used to clean the chicken shit from the eggs, understands this joke).

The aversion of most "western civilized" people against interiors might also come because they remind them of the functions of a living animal, which they are eating. Heaving balls from minced meat on your plate gives you the easier impression, they were grown on trees.

Anyway for me the "5th quarter" as they call it in Rome is one of the most important stuff for the kitchen.

You should be aware (if you care, I do not) after having eaten 200 g of tongue you have satisfied 50% of your daily  allowed intake of fat  and 60% regarding proteins. But it is perfectly suitable for a Paleo Diet :-)

I pretend,that tongue has to be cooked at least 2 hours in vegetable broth to get  it tender and to be able to rip off the skin.

My Chinese friend Nixy still wants to convince me that the best way to have tongue is to grill it quickly, which has its logic as tongue is fat.  But she still has to prepare it for me.

I present today 3 different modes of preparing Ox tongue, all very different from each other. One is a classical, one from a Michelin Star restaurant and one I invented on the spot.

For this dish I use only the tip of the tongue, which is homogeneous in texture and not so fat. After being cooked to tenderness, the skin is pealed and the tongue is finely sliced.

The vinaigrette can be a rich green sauce or also very simple. Olive Oil, white balsamic vinegar and dried Roman mint are the ingredients in the picture shown. Parsil would be a standard. I imagine fresh wild fennel would be nice

Rolls from tongue and savoy cabbage

This recipe is actually from Michelin Star Chef Karl Ederer. It is quite simple, but anyway you would like to have a slave in the kitchen, who is stirring the Sabayon.  The tongue is cooked as usually and finely sliced. The best leaves    of a  Savoy cabbage are blanched in salted water.  The Sabayon is from to egg yolks, white wine, butter and mustard.  The Sabayon is the most challenging part, because you have to stir it 40 minutes  in a bain marie to get the nice creamy consistence. Cabbage and tongue is rolled together and fixed with a stick. They are shortly reheated before being served on the Sabayon.

It is the most elegant way, I ever had a tongue. I like the combination with the slightly bitter taste        of the savoy cabbage. Red or brown lentils are more or less for beautiness

Tongue with anchovis and capers

A tongues is big.  I still had the less beautiful parts of the tongue, with a bit of fat,  callagenous material. I diced this into mouth pieces. I prepared a soffritto from onion, garlic, anchovies and capers in which I sauteed the tongue pieces, I added from the cooking broth of the tongue, after the cooking broth did evaporated, I added two table spoons of Mascarpone ,  well: fat wit fat, but it was very good

It depends. My gut feeling tells me white or rosè or a light red. And really the Montefalco Bianco from Scacciadiavoli paired very well with the first 2 dishes. But then, as a surprise, the white wine I had opened with the Anchovi/Caper dish (Vernaccia di San Gimignano) lost its fragrance to the spices. Whereas the Rosso Montefalco from Bocale went very well. The two strong tastes respected each other.