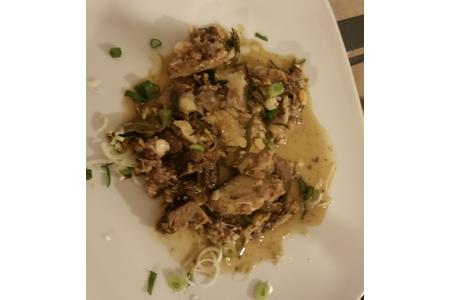 Should I show the lamb head before cooking?

For a while in my life I was thinking that only those people have the right to eat meat, who also are willing to kill an animal (and see a bloody head of a dead animal)

Well this is the result after cooking. First time in my life that I processed the entire head. I usually picked out only the brain to prepare it with butter and brandy. But it is such a waste!

So this time, I kept the brain in the head. I flavored it with salt, sage and rosmary and started to fry it in my deep copper pan. After the head had been well browned, I added a cup of white wine and closed the lit. After 20 minutes I took away the brain from the pan and then I kept simmering the rest for an hour.

The result you see on the plate, with some spring onions added. Still a lot from the head was wasted. I will go on training.

A variation was cooking the head in vegetable  broth, see the plate

Wine is not an easy decision. The brain would definitely go better with a white wine, but the tongue and the other meaty parts of the head would prefer a red. A Rosé  or a less tannic red wine is the choice.